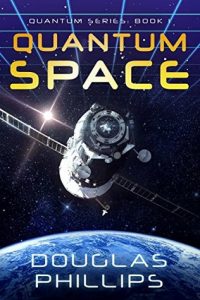 Dr. Daniel Rice is a government science investigator, brought in on a mission to investigate the mysterious disappearance of the Soyuz, a capsule transporting astronauts from the International Space Station, back down to earth.

With his partner, Marie Kendrick, a NASA operations analyst, Daniel begins an investigation that has them pondering the very real existence of additional quantum dimensions. What they discover will have consequences not only for the lost astronauts, but for the entire human race.

Quantum Space is a mind-bending ride; one that demands just as much from its reader as it gives – and that’s a good thing. Phillips begins the book solidly in the real world (though many might not realize it), incorporating scientific concepts such as the standard model, string theory, and particle acceleration.

With the aid of a few helpful illustrations, Phillips does a fairly good job explaining these concepts in a way that a standard non-scientist can understand. That said, there were certainly chapters that required pause for consideration, and took some time to sink in.

Adding balance to the scientific elements of the story, Phillips includes interesting personal relationships that allow characters to play off of each other, both personally, and professionally. Overall, their interactions were satisfying and believable, though there were a few brief moments of dialogue where I found myself questioning whether the character would ‘actually say that.’ This, and the occasional point of view confusion are the only reasons I deducted one-half a star. The interactions between Dr. Daniel Rice and Nala Pasquier—another scientist Dr. Rice is led to investigate—were by far the most interesting human elements to the story.

Quantum Space is above all, a sci-fi mystery, rife with insightful discoveries, and delightful surprises. It takes a few chapters to build momentum, but once it does, it grabs you and does not let go.  Phillips expounds on provable and theoretical scientific concepts, then takes them to the next level, bringing readers to a world that puts the galaxy at their doorstep. It may require a bit more mental energy than a purely pleasure novel, but those who put in the effort will be greatly rewarded with a believable sense of awe and wonder.