Book Review: 20,000 Leagues Under the Sea by Jules Verne 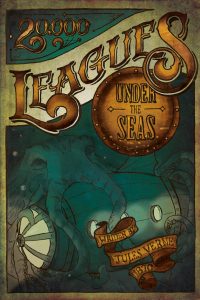 Professor Aronnax, his faithful servant, Conseil, and the Canadian harpooner, Ned Land, begin an extremely hazardous voyage to rid the seas of a little-known and terrifying sea monster. However, the “monster” turns out to be a giant submarine, commanded by the mysterious Captain Nemo, by whom they are soon held captive. So begins not only one of the great adventure classics by Jules Verne, the ‘Father of Science Fiction’, but also a truly fantastic voyage from the lost city of Atlantis to the South Pole.

“With its untold depths, couldn’t the sea keep alive such huge specimens of life from another age, this sea that never changes while the land masses undergo almost continuous alteration? Couldn’t the heart of the ocean hide the last–remaining varieties of these titanic species, for whom years are centuries and centuries millennia?”

Some Context
What must it have been like to be alive in 1870s? New empires and militarism were arising in Europe and Asia, and the United States was recovering from a grueling civil war. Despite the political instability, it was a time of revolutionary innovation. The windmill, the telephone, and motion pictures were all invented in this decade. It was also the decade in which Jules Verne published 20,000 Leagues Under the Sea.

Whether it’s necessity, or imagination that is the mother of invention, Jules Verne was ahead of his time. When 20,000 Leagues was published, submarines were small, primitive devices, prone to sinking and largely untested. This book brought submarines to full public consciousness, spurring on innovation and experimentation. In addition to being imaginative, Jules Verne was impeccable in his research, even computing the compressibility of seawater.

The Story
It’s obvious from the first page that this is a story from another era. The language, phrasing, and sentence structure are not what you’d find in most modern day novels. In addition, the pacing was noticeably different. Instead of a gradual climb to the climax, this storyline was subject to regular up and down intervals (like a sine wave): 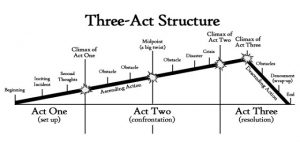 The action and discovery components of the book were detailed, gripping, and entertaining. Giant sea creatures, secret underwater passages, and incredible treasures of the deep—all with an undercurrent of danger and mystery. Who is captain Nemo? Will Professor Aronnax, Conseil, and their Canadian harpooner friend ever escape his incredible submarine? These questions, along with the excitement of their adventures are what kept me reading on.

My single biggest complaint about this novel might also be viewed by some as a strength. Jules Verne was known for being incredibly thorough with his research. The extent to which he went to include the scientific name for every creature under the sea was exhausting. There were literally pages comprised of laundry lists of species, genus, and family names for all the sea life they encountered. While this may have been interesting and relevant to a marine biologist, I found myself glazing over these unnecessary details.

The character development was solid, if not limited. Unsurprisingly (for a book from 1870), the cast was comprised only of white males. Professor Aronnax was likable for the most part, though the relationship between him and his manservant was a bit odd. Conseil, who I interpreted to be a scholarly apprentice, never complained, and essentially lived to please his master. To Aronnax’s credit, he never took advantage of his young protégé. I can only imagine how much more interesting this book would have been with a strong female character in the mix. What if Captain Nemo had been a woman?

Another somewhat dated—and therefore difficult to digest—element of this story was the characters’ attitudes toward hunting sea life. There are multiple episodes of killing animals for sport. It is (for the most part) accepted, sometimes glorified, and overall portrayed in a positive light. To be fair, there are some half-hearted attempts to put a moral spin on it, such as this quote from Conseil:

The categorization of this book is “juvenile fiction,” yet I found myself searching for definitions nearly every time I sat down for a reading session. Did children of the 1870’s simply have a larger vocabulary that we have today? Or perhaps authors were less afraid to challenge young readers? Either way, this read most certainly had an educational element to it.

Lastly, I felt the conclusion of the book to be strangely abrupt. Not all of the mysteries were solved, and certain characters underwent what I thought to be somewhat uncharacteristic changes.

In summary, I had a hard time finishing this book, and likely would have set it down before the end if not for its reputation as a classic. The adventures were gripping, but they ended too quickly, and the down time was often dry and protracted. It was harder for me to appreciate the artistic prose, given it was sandwiched between pages that could have been pulled directly from a biology textbook. The characters were fine, but they were all male and white.

I apologize in advance to all readers who have a nostalgic place in their heart for this book. I really wanted to enjoy it, but some things are best left at the bottom of the sea.