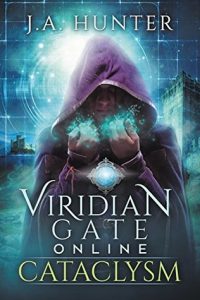 An extinction-level asteroid, 213 Astraea, is cannonballing toward Earth. Collision, imminent. An international team of scientists is working around the clock to avert the cataclysm—few are optimistic. World governments are preparing for impact with deep earth bio-dome bunkers, but only a select few lottery winners will be saved.

Jack Mitchel, a thirty-two-year-old EMT living in a tiny studio apartment on the West Coast, isn’t one of those winners.

Still, there might be a way for him to survive Astraea: a slim chance, requiring a radical leap of faith. Through a connection at Osmark Technologies, Jack’s acquired a NexGenVR capsule and with it, a one-way ticket to the brand-new, ultra-immersive, fantasy-based VRMMORPG, Viridian Gate Online. Taking that leap of faith, though, means permanently trapping his mind in the game, killing his body in the process.

Worse, one in six die during the transition, and even if Jack beats the odds, he’ll have to navigate a fantastical world filled with vicious monsters, domineering AIs, and cutthroat players. And when Jack stumbles upon a secret conspiracy to sell off virtual real estate to the ultrawealthy—transforming V.G.O. into a new feudal dark age—the deadly creatures inhabiting Viridian Gate’s expansive dungeons will be the least of his concerns.

If Jack can’t game the system, he’s going to be trading in a quick death for a long, brutal one …

A brilliantly self-aware LitRPG adventure that keeps you guessing.

“There’s always someone bigger, faster, stronger. So, you need to be smarter. Misdirection and a well-placed blow can fell even the most imposing warriors.”

What is it that makes the Viridian Gate Online (VGO) series so compelling? True, the premise is interesting—millions of people fleeing to a digital online fantasy realm in order to survive an impending cataclysm—but the bones of the series are not all that dissimilar from many of the other LitRPGs out there. There’s just something about this one that draws you in and doesn’t let go.

I ended up binge reading the six books currently available in a matter of weeks, and will therefore will be offering a birds-eye view of the entire series.

While the setting and mechanics are those of a LitRPG (Literature Role Playing Game), at its heart, Viridian Gate Online is a fantasy book about friendship, adventure, and overcoming impossible odds. Grim Jack takes the permanent leap into this new world, where he must carve out a life for himself with very little knowledge of what to expect.

Hunter does a fantastic job immersing you in the story from the very beginning. You’re right there in the driver’s seat with Grim Jack, learning the rules of this world, discovering his strengths, weaknesses, fears, challenges, and abilities.

Since this is a LitRPG, I think it’s important to take a look at the mechanics of the story—how this virtual world works. Without going into too much detail, I was pleasantly surprised with the amount of effort Hunter put into the transition between real life, and the Viridian Gate world. Grim Jack is both thrilled and dismayed to discover that every physical sensation he experiences in the game—be that eating, exertion, injury, etc.—is indistinguishable from real life. For the most part, these logistical details were explained in a satisfying way that left me with no lingering questions about how it all works. As hinted at in the description, the permanent transition is not a pleasant one, which somehow left me even more invested than I would have been otherwise. Within VGO, players can die and respawn (though not without big consequences), while NPCs (Non Player Characters, as in, not humans) once dead, are gone forever.

The RPG (Role Playing Game) elements of this book are impossible to miss. Hunter includes graphics with character stats and abilities throughout, however it is important to note that these are not essential to the story. While they are likely to be appreciated by the gaming enthusiast, they can be ignored by those more interested in the story.

The world itself is held together by eight Overminds—beings of artificial intelligence that manage things like weather, time, order, chaos, and conflict.

Grim Jack begins his adventure inside VGO with an act of mercy, which ends up setting on a path toward his greater destiny. Much to the chagrin of Cutter, his NPC companion, Jack consistently chooses the moral option, as opposed to the profitable one. This goes a long way to make Jack a likable character, and creates entertaining tension between him and his stealing, drinking, and gambling companion. Jack’s talents and ingenuity take him on a journey that ends up impacting the millions of human players who have transitioned over, and the NPCs.

Side note: The millions of NPCs in Viridian Gate are a curiosity that have yet to be fully explained by the author (though it appears this mystery is intentional). There are main character NPCs who are key to the story, and essential in creating the dynamics that make it so enjoyable. The main difference is, if the NPC dies, it’s gone for good. All of this begs the question – what ARE the NPCs? Are they beings of artificial intelligence like the Overminds? Perhaps we’ll find out eventually.

These books hooked me. Why?

First off, they’re wicked clever. Throughout the series, Grim Jack is faced with challenges that require him to defy seemingly insurmountable odds. Hunter has a knack for making things look particularly hopeless, then delighting you with an unforseen solution. I was regularly surprised by the inventive ways in which Grim Jack overcame the obstacles before him.

The second reason I loved these books is the character cohesion. There’s such enjoyable contrast between Jack and Cutter. Even the NPCs possess a fantastic history and depth. There’s a pretty good mix of diversity, though Hunter describes some non-white characters as “dark-skinned,” which, in my humble opinion, could have been handled with greater eloquence. There’s a love interest, Abby—”a short, dark-skinned curvy woman with an intricate pile of brown curls,” and an Overmind named Sophia who is “a dark-skinned woman in a flowing white toga.” Fortunately these characters don’t embody any racial tropes, as far as I could tell. Other characters/races include big green ogre-types, elves, dwarves, and wodes/imperials (regular old humans). There’s no indication as to Grim Jack’s ‘real life’ race, but within VGO he’s a murk elf with “dusky gun-metal gray” skin.

The third reason I was drawn in so completely was because the story itself never became boring or redundant. In each book, the stakes are raised, new characters come into play, and Jack gains new interesting and exciting abilities.

What could have been better?

I have a few minor gripes, though none that detracted from my enjoyment of the series in any significant way.

It’s somewhat obvious in book one that J.A. Hunter is a debut author. The grammar was by no means atrocious or distracting, but if I’m being picky, I felt it could have been more refined. For example, certain phrases were repeated multiple times (e.g. “after a beat”). This was perhaps made more obvious by the contrast with the later books in the series. His progression is notable, and the professionalism of the books grows as the series continues. By the time I was on book six, these issues were virtually non-existent.

My one other complaint is the over use of certain gamer culture acronyms and phrases. I specifically remember being put off by the phrase “pwnd” (internet-speak for “owned,” or thoroughly defeated). These occasional instances drew me out of the story, albeit briefly.

Overall I found this series to be highly enjoyable. While gamers might get a little more out of it, I truly believe this is a series that can be enjoyed by gamers and non-gamers alike. The wonderful character chemistry, clever problem solving, and vivid world building make for a satisfying adventure fit for any fantasy fan.

Get it on Amazon