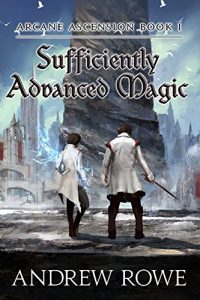 Five years ago, Corin Cadence’s brother entered the Serpent Spire — a colossal tower with ever-shifting rooms, traps, and monsters. Those who survive the spire’s trials return home with an attunement: a mark granting the bearer magical powers. According to legend, those few who reach the top of the tower will be granted a boon by the spire’s goddess.

Now, it’s Corin’s turn. He’s headed to the top floor, on a mission to meet the goddess.

If he can survive the trials, Corin will earn an attunement, but that won’t be sufficient to survive the dangers on the upper levels. For that, he’s going to need training, allies, and a lot of ingenuity.

The journey won’t be easy, but Corin won’t stop until he gets his brother back.

Sufficiently Advanced Magic is a charming and intricate coming of age adventure story by fantasy author Andrew Rowe. With its own original and complex system of magic, the world Rowe creates is both believable, and intriguing. This first novel of the series follows young Corin Cadence, the black sheep son of a noble house. His family has been devastated by the loss of Corin’s ‘golden child’ brother, Tristian. While Corin’s goals are centered on finding out what happened to his brother, the plot quickly expands to include his witty half-sister, a mysterious foreigner, an old childhood friend, and a rough around the edges talented young woman. Much of the story takes place in a university-like setting, with students learning about their magical abilities, similar to Harry Potter, only less whimsical.

I found all the characters to be endearing, and rather likable, especially Corin, who struggles with social anxiety and human contact in general (we learn more about why in the next book). His underdog dynamic meshes well with the other characters in the story, making for some very entertaining exchanges.

While the plot pacing can be somewhat deliberate at times, with Rowe expounding upon potential magical affects and implications in depth, it never became boring. The action scenes (though few) were well written, suspenseful, and easy to follow.

My only qualm with the book has to do with how it begins. The first few scenes involve a rather complicated venture into a magical tower, where Corin must face a series of challenges, both of the puzzle, and monster variety. There are semi-complex room descriptions, different colored keys, varying doorways, etc. While this wasn’t at all a deterrent to me, I felt that it didn’t give an accurate portrayal of the true emotional depth of this novel. The risk is that it might end up turning some off at first, but I recommend you power through—it’s well worth it!

The thing that stands out most to me about this series (and the reason I gave it 5 stars), is the personality shining through on every page. Rowe has breathed such life into Corin Cadence, making him a truly unique and resourceful character that I would be happy to know in real life.

If you’re a fan of complex world building, rational magic, and young characters discovering their true potential, then this book is one you will not want to miss!

View it on Amazon