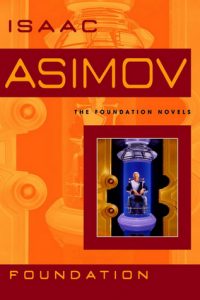 For twelve thousand years the Galactic Empire has ruled supreme. Now it is dying. But only Hari Sheldon, creator of the revolutionary science of psychohistory, can see into the future–to a dark age of ignorance, barbarism, and warfare that will last thirty thousand years. To preserve knowledge and save mankind, Seldon gathers the best minds in the Empire–both scientists and scholars–and brings them to a bleak planet at the edge of the Galaxy to serve as a beacon of hope for a fututre generations. He calls his sanctuary the Foundation.

But soon the fledgling Foundation finds itself at the mercy of corrupt warlords rising in the wake of the receding Empire. Mankind’s last best hope is faced with an agonizing choice: submit to the barbarians and be overrun–or fight them and be destroyed.

“The sum of human knowing is beyond any one man; any thousand men. With the destruction of our social fabric, science will be broken into a million pieces. Individuals will know much of exceedingly tiny facets of what there is to know. They will be helpless and useless by themselves. The bits of lore, meaningless, will not be passed on. They will be lost through the generations. But, if we now prepare a giant summary of all knowledge, it will never be lost. Coming generations will build on it, and will not have to rediscover it for themselves. One millennium will do the work of thirty thousand.”

Isaac Asimov is considered one of the most influential sci-fi authors of all time, and not without good reason. He published the first book in the Foundation series in 1951, at the shockingly young age of 21. Let that sink in a moment. A 21 year old author wrote a book that nearly 70 years later, is still considered a cornerstone of the sci-fi genre.

The first thing that struck me about this novel was the timeless quality it possessed. Had I not observed the publication date as being 1951, I could easily have placed it in the past decade. Asimov writes with intelligent prose and an expansive scientific vocabulary, while somehow managing to maintain accessibility.

The book is broken up into five sections, beginning 12,000 years in the future. Under the rule of the Galactic Empire, humanity has spread to the far corners of the Milky Way Galaxy. Brilliant scientist and psychohistorian Hari Seldon discovers through complex probabilities that the empire is crumbling, and will soon fail, plunging much of the galaxy into chaos. In order to preserve the advancements of humanity and prevent thirty-thousand years of barbarism, Seldon formulates a plan. The book then leaps forward several decades to the newly established Foundation world on the edge of the galaxy – the result of Seldon’s efforts. The prescient scientist is long gone by this point, but he leaves behind curious clues as to how the foundation world should overcome the inevitable crises it must face.

Asimov continues the story along this vein, describing the difficulties the varying foundation world leaders must face. Each new section leaps forward in time, presenting new characters, challenges, and a crisis. One of the most redeeming qualities of Foundation is its unpredictability. Asimov creates challenges with insurmountable odds, which his intractable characters navigate in the most clever and unexpected ways.

The characters themselves are all highly unique and interesting, which is why it is such a shame that each section is so short. I would have loved to have read more about Mayor Saldor Hardin, or Master Trader Hober Mallow. The ending, while satisfying, felt somewhat abrupt.

Despite the short length of this book, Asimov does an incredible job creating a vast, expansive galaxy in which anything can take place, effectively setting the stage for the rest of the series (and then some).

Foundation is a quick, enjoyable, and intelligent read that will take you on a journey with twists and turns you likely won’t see coming. With this being his early work, it’s easy to see why Isaac Asimov is considered one of the greats, and I look forward to continuing the series.