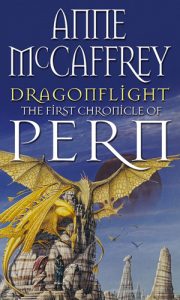 Dragonflight is the story of a fierce, resourceful young girl of high blood—Lessa, whose hold is brutally conquered by a ruthless, morally bereft antagonist—Lord Fax. For ten turns (in Pern, years are referred to as turns), she poses as a lowly drudge, covered in grime, slowly biding her time while subtly sabotaging Fax’s tenuous rule.

Lessa’s problems are soon put into perspective when she is swept up into a world of dragons, dragonriders, and the deadly threads that fall from Pern’s skies, threatening to annihilate every last scrap of life on the planet. Normally the dragonriders would stand against this threat, burning the threads from the skies with fire, but there’s just one problem: Nearly all the dragons and their riders have been missing for hundreds of turns. Now Lessa, and the dragonrider F’lar must figure out how they will stop the threads from reaching Pern’s soil, turning it into a barren wasteland.

The first book in the Dragonriders of Pern series is most definitely a memorable one. I have encountered other reviews of this book criticizing its prose, claiming that it was early in Anne McCaffrey’s career, and therefore her writing was less refined. I tend to disagree with this assessment. I found her prose to be quite fitting for the story, and there were more than a few moments where I found myself searching the definition of a word she’d used.

The storyline itself was interesting, and I was pleasantly surprised to learn that there was more to it than simply a tale of becoming a dragonrider. It included sci-fi elements that went beyond the setting (a planet in a distant solar system), delving into the paradoxical nature of time travel.

The characters were unique, well thought out, and for the most part, believable, and the ending resolved any lingering questions I had. On that note, I felt there could have been a little more mystery to pull me along to the next book.

My one big gripe with this book has to do with how the female protagonist—Lessa—is portrayed. There is a bizarre sense of incongruence arising from her interactions with the main male protagonist—F’lar. Lessa’s actions and dialogue lead you to believe she is a powerful, independent woman, untamed and destined to lead. Despite this, she is cowed by F’lar, and there are multiple instances in the story where he grabs her by the shoulders and “shakes” her. Toward the end she is so afraid of his “shaking” punishments, that she is hesitant to return home for fear of his admonition. All this, and she still returns his affection, and I get the impression they are meant to be falling in love with each other.

I understand that this book was published in 1968, but this kind of male/female dynamic made it really hard for me to actually like F’lar. In addition, it made it harder for me to buy into Lessa being as strong as McCaffrey would have me believe.

Despite these issues, I still find myself regularly thinking back to the world of Pern. It’s such a masterfully crafted, well thought out universe, that it became real for me. I truly enjoyed Dragonflight, and I look forward to returning to the world of Pern in the next book, Dragonquest.