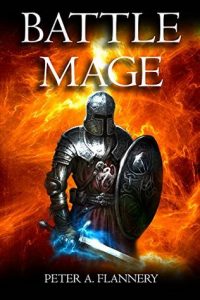 The world is falling to the burning shadow of the Possessed and only the power of a battle mage can save it. But the ancient bond with dragonkind is failing. Of those that answer a summoning too many are black. Black dragons are the enemy of humankind. Black dragons are mad.

Falco Dante is a weakling in a world of warriors, but worse than this, he is the son of a madman. Driven by grief, Falco makes a decision that will drive him to the brink of despair. As he tries to come to terms with his actions Falco follows his friends to the Academy of War, an elite training school dedicated to martial excellence. But while his friends make progress he struggles to overcome his doubts and insecurity. Even Queen Catherine of Wrath has her doubts about Falco’s training.

While the Queen tries to unite the Kingdoms against the Possessed, Falco struggles to overcome his fears. Will he unlock the power trapped inside of him or will he succumb to madness and murder like his father?

I must admit, when I first picked up Battle Mage, I was not expecting anything extraordinary. A fairly generic title, and a nice looking, but also somewhat generic cover. As I delved in however, I found the story to be anything but. It begins with Falco Dante and his best friend Malaki. Since a young age, Flaco has been afflicted with a lung disease, putting him at a great disadvantage. He’s got lots of room to grow, and Flannery makes use of every inch. Malaki, the son of a blacksmith, is quite the talent with a sword. While his character goes through less of a metamorphosis, he’s still enjoyable to get to know. Both characters are entirely likable, and I found myself rooting for them from the beginning.

In this coming of age fantasy adventure, the world is afflicted by the presence of the “possessed,” a demonic force from hell that is determined to overtake humanity, ensnaring it in eternal, permanent suffering. The bigger demons emanate an aura of fear that cripples regular soldiers, unless under the protective shielding of a battle mage. When a battle mage completes his (or her) training, they may attempt to summon a dragon. If it answers their call, then they are bonded with it, and together they stand in battle against the demons and their armies of possessed. I really enjoyed the concepts and premise of this book. It achieves a balance between original ideas, and familiar fantasy concepts that you don’t always see in this genre.

Really my only criticism (and it’s a minor one) is the occasional uncomfortable perspective shift. While a little confusing, this was rare, and very easy to forgive given how enjoyable the book was overall.

This is a novel that is easy to get lost in. It builds steadily, and doesn’t skimp on character development. Flannery does an excellent job of creating suspense, crafting a story with a myriad of twists and unexpected outcomes. It has something for everyone. There is martial combat, romance, internal struggle, magic, mystery, betrayal, politics, and grand scale battles. Each aspect is written with great care, fitting together like a giant, intricate puzzle.

If you are a fan of the genre, then this is one book you will not want to miss.

View it on Amazon